Keep up to date with Flex IT news. 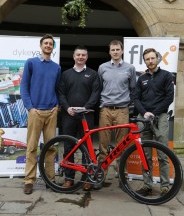 Flex IT and Dyke Yaxley back Cycle Grand Prix in Shrewsbury

Shrewsbury Cycle Grand Prix will be held on Sunday May 28, and both Flex IT and Dyke Yaxley Chartered Accountants have signed up to sponsor the event.

It’s the second year both Flex IT and Dyke Yaxley have supported the Grand Prix, and our directors of both firms are looking forward to a busy day.

Flex IT director Matt Childerhouse; said he is delighted that Flex IT and Dyke Yaxley are on board with the Grand Prix again this year.

“We were approached by Chris Pook, a director of Cooper Green Pook Estate Agents, who are organising the event, as we deliver all their technology requirements, and we were very pleased to sign up as sponsors. If last year’s event is anything to go by, it’s sure to be a fantastic day with lots of exciting races scheduled, and we can’t wait to be a part of it.”

Dyke Yaxley (based next to Flex IT) director Adrian Key said:

“We’re very proud to be backing the event as it draws in cycling fans from all over the region, and it’s a fantastic opportunity to put Shrewsbury on the cycling map. As a company, we’re committed to supporting local organisations and local events, and to be associated with such a dynamic and high profile initiative is great news for us.”

This year’s Grand Prix sees an exciting new course for the men’s and women’s races, and plenty of races for the junior and youth categories.

The races will be filmed and live-streamed online, and a giant TV screen will be installed on the High Street to give the crowds a view of the action taking place around the course.

The Elite men’s race will be a nationally recognised event with a generous prize fund, and the men’s support race will be part of the West Midlands Road Race League. The women’s only race will also have an excellent prize fund and will feature the National Masters Criterium Champion.

We’re here to help. If you have any questions please complete the enquiry form below.

Integrity, professionalism, the very best services and implementing cost-efficient solutions are at the top of our list.